Rock Pooling on the Southdowns ???


The sun was shining brightly and after a very busy day yesterday it was the only choice, a day chilling down at Birling Gap. With tide checker confirming that the tide was going out, we rushed around making a picnic with lashings of tea and cake ... I like tea a lot !! The area is managed by the National trust and thy are investing in refurbishing the hotel and do a great job in in putting on events from beach combing, star gazing etc.

Now Birling Gap is my spiritual home, because as a shepherd of the Downs, I once lived in the old coastguard cottages ... Yes that's right the ones falling into the sea. I spent many a happy time, living almost alone in the winter time when the seas crash hard against the cliffs driven madly by the unrelenting winds., and being stared at like a goldfish in a bowl by the tourists who peered through the windows in amazement that someone lived there!!When I was living there there were seven, now only five cling to the cliff, desperate to withstand the pull of the ocean.

As a shepherd, I would entertain coach loads of visitors with a slightly dishonest trick. Now being a shepherd, I trained many sheepdogs (In fact I trained dogs for many purposes including search & rescue, gun-dogs etc) Well, to earn a pint or two, I would sit at the front of the hotel, in full shepherding gear, with crook and gentle whistle commands no louder than a mouse. People would ask what I was doing and pointing to the Belle tout lighthouse way off in the distance, I would explain I was working my dog. Well they could believe it and allowing them to use my binoculars, would point out the dog and tell them I would ask him to lay down, go right etc. So with a quietly spoken "Come-bye" ( which was the dog's command to go right) They rocked back stunned in disbelief as the dog did as he was told. I was photographed and collected pints behind the bar, plus some gave "tips" for the dog on his return!! They never new that a farm worker and very good friend was in the gorse scrub up the hill next to the dog with a two way radio, as i gave the commands, he simply relayed them to old faithful !! Dishonest I know, but harmless.

Anyway, we dashed down the steps with nets and buckets
(you can never to be to old for getting excited about rock-pooling) And we quickly set up a basecamp on the beach west of the steps, then charged wildly out across the sands to the sea..... And hell it was a cold shock but always best to get your feet wet straight away rather than skip about trying to avoid the inevitable !! The inspections of the pools began, lifting rocks, moving seaweed and entering a new and fascinating underwater micro world. and very soon we were finding mass of common starfish. My boys prize these as second in the top three (Octopus and sharks being the top one) 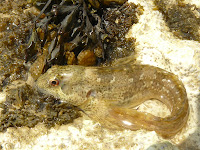 We giggled our way along towards the cuckmere haven, checking pools, dipping nets and taking in the fresh air. Boats of all shapes passed us by on our left and two the right, the impressive chalk cliffs of the Seven Sisters loomed above us given the viewer a glimpse of what lays below the short sweet grass of the downs. Crabs became abundant as we moved up the coast, sparking a competition between my boys and me of who can find the biggest...... And as usual a wager was placed to which I knew I was going to lose as my finds were disqualified for many many reason that they could come up with. One such was "Yes dad, it's big, but it has a missing leg so does not count" What ?????
We battled on, finding all sorts of strange and wonderful creatures, And armed with a book of the seashore, I tried my best to identify all before the boys whizzed of to the next pool. Shrimp, Prawns, Crabs, Small fish, snails, winkles, seaweed, old shoes and strangely shaped stones ... all were our prey!! Now at this point I must stress. ALWAYS REPLACE THE STONES AND CREATURES BACK. Never take away and KEEP A WATCH ON THE TIDE.


One of the best finds was what looked like an old ship's boiler, it's been there for years and has still not scumbed to the ocean as much as she tries to take it like the ship it came from scuppered many many years ago. The tide was turning and more to the point I needed tea. I had to admit losing the hunt and both boys reminded me of the payment needed to settle the bet. We moved back along the beach towards the lady who was now guarding our little basecamp and after a great 4 hours of fun, that's free, the boys and us left happy and giggling about our adventure ( It really does beat X box games ) So I would say, if you haven't been rock pooling at Birling Gap .... Add it to you bucket list, It's a great place at the start of the Southdowns. 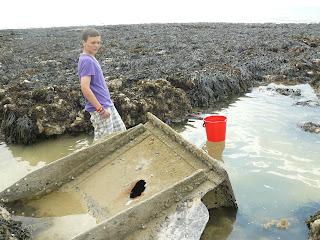